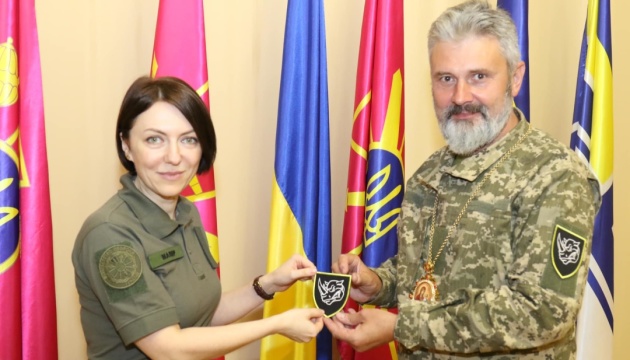 Deputy Defense Minister Hanna Maliar discussed with Metropolitan Klyment of Simferopol and Crimea the role of chaplaincy in the armed forces and the specifics of training priests.

The official reported the news on Facebook, seen by Ukrinform.

“The Ministry of Defense is working on the urgent issues of the introduction of military chaplaincy service in the armed forces. On November 30, 2021, the Verkhovna Rada of Ukraine adopted the corresponding law, which entered into force on 19 March 2022. Therefore, military chaplains will soon be part of the Armed Forces of Ukraine,” Maliar said following the meeting with Metropolitan Klyment, who spiritually cares for one of the military units deployed on the front lines.

Read also: Epiphane meets the head of Church from England

Maliar also noted that in times of war, the role of chaplaincy in the armed forces is considered extremely important. Today, many priests are on the front lines, alongside the military, offering spiritual assistance to the defenders of Ukraine. The job of a military chaplain is multifaceted and requires special training for the application of priests.

The deputy minister noted that chaplains have a mission to fulfill on the front line. In turn, Metropolitan Klyment said the very presence of a chaplain in a combat unit is a positive thing.

“Soldiers can appeal not only to commanders, but also to priests. My task is to be there, not to let the soldier get tired. We are also fighting, only in the spiritual realm. Along with this, there is there is still a need for spiritual support from the military, as well as a need for special training for chaplains for their mission in the war zone,” the deputy quoted the Metropolitan as saying.

As reported by Ukrinform, on December 17, President Volodymyr Zelensky signed the Law of Ukraine “On Military Chaplaincy Service” (No. 1915-IX), adopted by the Verkhovna Rada on November 30.