In recent years, India has been breaking down gender barriers in its armed forces by attracting women to serve in ground combat positions, aboard submarines and even tank units.

It was in February 2016 when the then President Pranab Mukherjee announced that women would finally be allowed to take on combat roles in all sections of the Indian Armed Forces. On this Independence Day, let’s celebrate these incredible women who serve the country and break down barriers.

She also coordinated medical research for the Armed Forces as the Additional Director General of Armed Forces Health Services (AFMS). It transitioned from the Army to the Navy as AFMS has a common pool allowing officers to migrate between services as needed.

Punita Arora is the first woman in India to hold the second highest rank, Lieutenant General in the Indian Armed Forces, as well as the rank of Vice Admiral in the Indian Navy. | Facebook/Indian Air Force fans

Lt. Col. Mitali Madhumita, in February 2011, became the first female officer in the country to be awarded the Sena Medal for Bravery, which is a decoration awarded to soldiers for their exemplary bravery during J&K operations and in the northeast.

Madhumita also led the army’s English training team in Kabul, becoming the first officer to reach the Indian Embassy in Kabil which was attacked by suicide bombers in February 2010.

Although unarmed, she ran nearly 2 km to reach the spot and personally extricated more than 19 army training squad officers who were buried under the rubble and rescued them. immediately taken to hospital. 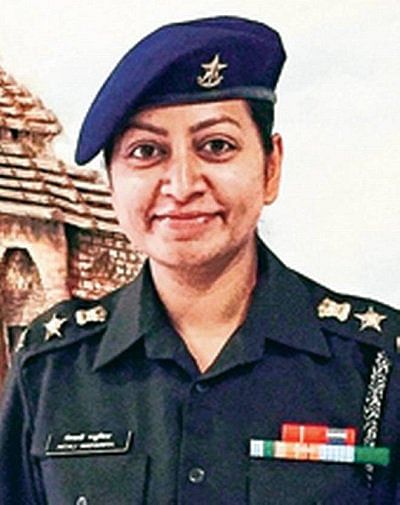 Priya Jhingan enrolled as 001, the first female cadet to join the Indian Army in September 1992. A law graduate, Jhingan always wanted to join the army.

It was in 1992, she wrote a letter to the head of the army himself, asking to let women in. A year later, he did, and Jhingan along with 24 other new female recruits began their journey.

When she retired, in her speech, she said, “It’s been a dream I’ve been living every day for ten years.

Anjana Bhaduria is the first woman to win a gold medal in the Indian Army. She has completed her MSC, however, she always dreamed of becoming an army officer. After seeing an advertisement for female officer induction, Bhaduria applied to the army through the Women Special Entry Scheme (WSES) and was accepted into the first ever group of female cadets in the Indian Army in 1992.

She excelled in all areas during training and was also chosen for the gold medal from a group of both men and women. She served in the Indian Army for ten years.

Lieutenant Colonel Sophia Qureshi of the Corps of Signals made history when she achieved the rare distinction of becoming the first female officer to lead an Indian Army training contingent at Force 18, the ASEAN Plus multinational field training held in 2016.

Lieutenant Ganeve Lalji, a young intelligence officer, has become the first woman to be appointed as a key assistant to an army commander. As a third generation army officer, Lalji was appointed into the Military Intelligence Corps in 2011. She recorded many achievements during her training course at the military school in Pune. She was shortlisted from 350 female officers.