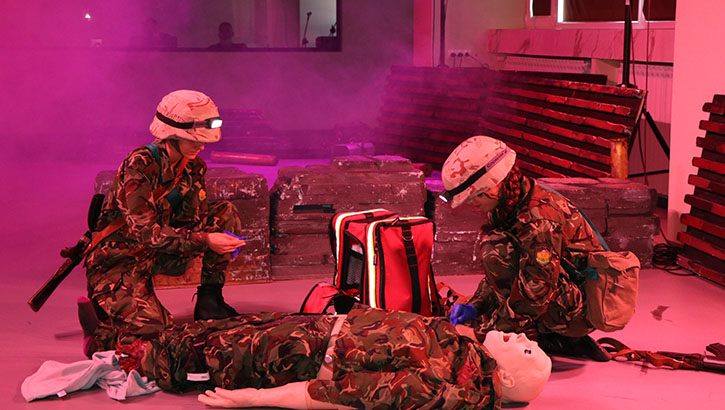 The Bulgarian Armed Forces presented their combat lifesaving training to US Ambassador to Bulgaria Herro Mustafa and leading entertainers from the US Army Tennessee National Guard and US Air Forces Europe at the Military Medical Simulation Center Bulgarian, August 10. The event highlighted collaborative planning between the Bulgarian and US Armed Forces in the field of combat medicine and highlighted how medical interoperability saves lives on the battlefield.

The Medical Simulation Center opened in the fall of 2021 and enables Bulgarian soldiers to learn essential skills in combat medicine. The Combat Lifesaving Course (CLS) runs monthly and trains 20 medical students from point of injury to battalion first aid post care (NATO Role 1). In the near future, the center is expected to launch combat paramedic courses for more advanced combat medical training.

“We have wonderful military hospitals with fully trained staff, and the military medical academy faces the greatest challenges in medicine,” said Bulgarian Major General Ventsislav Mutafchiyski, Chief Medical Officer of the Bulgarian Armed Forces. “But wounded soldiers must arrive alive at these hospitals. This is exactly the philosophy behind the creation of this center: to be ready for the first 10 minutes.

“Initially, we were the ones who came to teach Bulgarian soldiers the CLS course before deployment,” Evans said. “As discussions progressed, we decided to expand the CLS curriculum so they could start teaching it themselves. We started with the combat lifeguard course and at the same time started to develop the simulation center. The center opened in September 2021, where they can actually do the physical training and keep everyone consistent, whether it’s army, air force or navy. All of their paramedics will be trained to the same standards. »

Strobe lights, smoke and simulated crackling gunfire brought the CLS demonstration to life at the simulation center. The Bulgarian medical team treated a simulated victim to the point of injury and transferred him to the aid station. After the demonstration, the US Ambassador thanked the participants and shared her comments.

“This demonstration was very impressive,” Mustafa said. “It’s one of the best things we’ve seen in our partnership in a long time.”

“It’s been a great partnership and it’s been great to watch this evolve from just an idea with a few scribbled notes on paper, to what has now come to fruition,” Evans said. “It’s something great that we can develop for their country and strengthen our interoperability. Together we can make Bulgaria a stronger NATO ally and support the NATO mission.