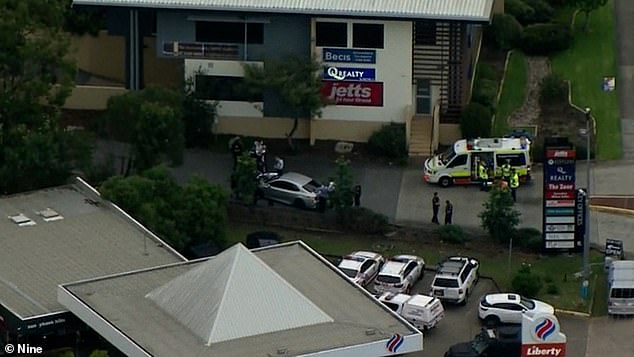 An armed man has died in hospital after being shot dead by police following a six-hour siege in south Brisbane.

The standoff began around 1:20 p.m. on Monday at a business on Compton Road in Stretton after officers responded to reports of a disruption.

But the situation worsened and police negotiators were called around 3 p.m. after the surrounding businesses were evacuated and an exclusion zone was set up.

Five members of the public had been locked inside the company in a room separate from the man.

Dozens of emergency vehicles, including police and ambulances, surrounded the gas station (pictured)

“It will be alleged that around 7:30 p.m. the man raised his gun at police and was shot,” Queensland Police said in a statement Tuesday.

The 48-year-old man from Woodridge was rushed to hospital in critical condition but later died.

The five members of the public were assessed by paramedics and made statements to police.

No one else was injured.

The Queensland Police Ethical Standards Command is investigating, with assistance from the Crime and Corruption Commission.