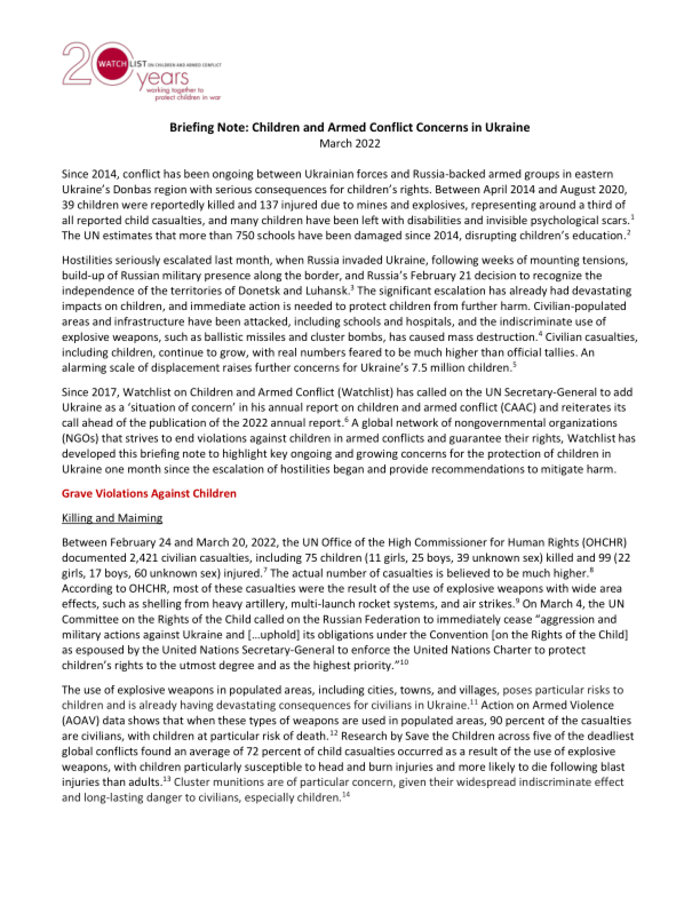 Since 2014, a conflict has continued between Ukrainian forces and Russian-backed armed groups in the Donbass region of eastern Ukraine, with serious consequences for children’s rights. Between April 2014 and August 2020, 39 children were reportedly killed and 137 injured due to mines and explosives, representing around a third of all reported child casualties, and many children were left with disabilities and invisible psychological scars. The UN estimates that more than 750 schools have been damaged since 2014, disrupting children’s education.

Hostilities escalated seriously last month when Russia invaded Ukraine, following weeks of escalating tensions, the strengthening of the Russian military presence along the border and Russia’s decision on February 21 to recognize the independence of Donetsk and Luhansk territories. The significant escalation has already had devastating effects on children, and immediate action is needed to protect children from further harm. Areas and infrastructure populated by civilians have been attacked, including schools and hospitals, and the indiscriminate use of explosive weapons, such as ballistic missiles and cluster bombs, have caused widespread destruction. Civilian casualties, including children, continue to rise, with actual numbers feared to be much higher than official counts. The alarming scale of displacement raises new concerns for Ukraine’s 7.5 million children.

Since 2017, Watchlist on Children and Armed Conflict (Watchlist) has called on the UN Secretary-General to add Ukraine as a “situation of concern” in his annual report on children and armed conflict (CAAC) and reiterates his call before publication of the 2022 Annual Report. A global network of non-governmental organizations (NGOs) working to end violations against children in armed conflict and secure their rights, Watchlist has developed this briefing note to highlight highlights the main current and growing concerns regarding the protection of children in Ukraine one month after the escalation of hostilities began and provide recommendations to mitigate the damage.