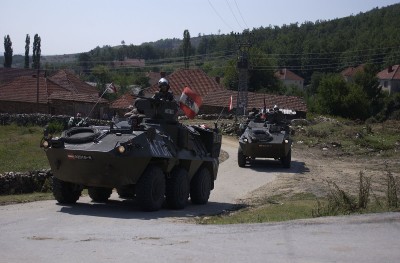 The Austrian Armed Forces’ exercise and training plan for 2022 includes exercises in Europe, Africa and Canada. Austria will send up to 150 soldiers to take part in the approximately 30 exercises.

Against the backdrop of the Russian invasion of Ukraine, Austria is strengthening its military cooperation with its Western partners.

Defense Minister Klaudia Tanner stressed the importance of the exercises: “For the Austrian armed forces and the Austrian state, a common security and defense policy in Europe, as well as cooperation at international level, are all important. Common action is particularly important. important in times of crisis. I am glad that the international exchange of experience and knowledge in military and security policy is supported by so many parties.

According to the BMLV, the exercises will be conducted within the framework of international organizations, the European Union, multinational cooperation and the “Partnership for Peace” with NATO.

Austria is allowed to deploy soldiers abroad for peacekeeping, humanitarian and disaster relief measures as well as search and rescue measures.

The Austrian armed forces, called Bundesheer in German, are currently deployed in many international peacekeeping missions, the most important being in the Western Balkans, in particular Bosnia and Herzegovina and Kosovo, and in the Middle East in Lebanon .

The aim of the exercise and training measures is the international exchange of experience and the standardization of operational techniques.

The joint exercises will take place in the fields of NBC defense, alpine terrain and air forces, among others. In June 2022, for example, 80 soldiers will be sent to Hungary for the “Fire Blade” exercise. This is a European Union training exercise for international alliance helicopter crews. The objective is to increase the capacity for cooperation in operations.

The Partnership for Peace (PfP) is a military cooperation link between NATO and 20 non-NATO European and Asian countries, established in 1994.

Since 1996 Austria has been a member of the Partnership for Peace. In Austria’s view, PfP should continue to be able to contribute to operations “under the authority and/or responsibility of the UN, NATO and/or the OSCE”. Private emergency planning is an important area of ​​Austria’s contribution to PPP. In 1997, Austria accounted for 30% of PPP activities in this area. With NATO/PfP support, Austria took part in 227 activities that year, including 14 peacekeeping missions involving 713 personnel.

As part of PfP, a tool for NATO cooperation with its partner countries, the Coalition Warrior interoperability exercise will be held in June 2022. There, interoperability tests as well as the improvement of systems and mission-oriented applications for data communication will be carried out in June 2022. the context of a crisis management scenario.

Austria thus makes a significant contribution to international peacekeeping and stabilization tasks. From November to December 2022, the binational “Combat Exercise 20” will take place in Germany.

Austria is sending 150 soldiers to the neighboring country for this purpose. The objective is to improve the capacity for cooperation at the level of small units with an emphasis on crisis management.

The thirty or so exercises planned for 2022 aim to improve European cohesion but also international cooperation between States and organisations.

The joint training will add value to the Austrian national military defense in the areas of cybersecurity, disaster relief and airspace surveillance.