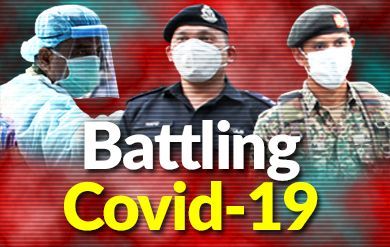 KUALA LUMPUR: The armed forces are ready to fight Covid-19 in the five states with high infection rates.

Efforts to manage and remedy the situation in Sabah, Johor, Kedah, Penang and Kelantan will be a priority for the armed forces, Senior Minister Datuk Seri Hishammuddin Hussein said.

“As I mentioned earlier, one of the main objectives of the armed forces is to achieve the national program against the virus.

“The armed forces have sufficient infrastructure, resources and expertise, and they are ready to be deployed at any time,” he said at a press conference yesterday.

Health Minister Khairy Jamaluddin said on Wednesday the government would shift its focus on Covid-19 to the five states that have seen a rapid rise in infections.

Sabah, Johor, Kedah, Penang and Kelantan will benefit from a boost in terms of vaccine supply and deployment of human resources.

Hishammuddin said the armed forces were ready to help with the efforts, especially the construction of field hospitals in those states.

“Field hospitals will be able to provide treatment for Covid-19 patients, especially those at stage three and above. I believe that assistance from the armed forces will ease the burden on the health ministry in those states, ”he added.

He said the armed forces were ready to deploy vaccination teams to all five states, especially in rural areas, adding that comments were welcome from all on Covid-19 standard operating procedure. (COOL).

The senior minister, who was appointed to lead pandemic management efforts under the National Security Council, said one of his tasks is to evaluate and update the SOP from time to time.

“I think this is an ongoing effort and requires an inclusive approach,” he added.