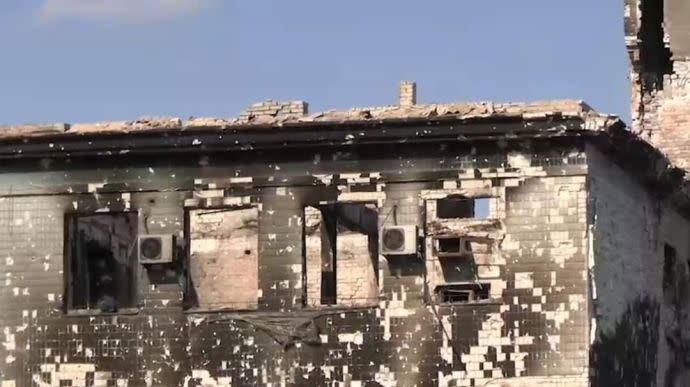 In Luhansk Oblast, the Armed Forces of Ukraine forced the Russian occupation forces to withdraw from Verkhnokamianske, killed 12 Russian OMON fighters based in Sakhalin near Lysychansk, and destroyed a Russian military barracks in Kadiivka.

Quote from Haidai: “The Ukrainian Defense Forces are inflicting casualties on the enemy on all fronts where active combat operations are taking place. Meanwhile, Western-supplied artillery helps keep the Russians on their toes beyond the front lines.

Over the past few weeks we have hit several ammunition depots and invading troop concentrations in Luhansk Oblast alone. There were also many successful strikes [on the Russian forces – ed.] in Donetsk Oblast, preventing the enemy from launching more concerted attacks. Moreover, every night instead of sleeping they wait to be attacked.

For example, yesterday the premises where the Russian military were stationed were destroyed in Kadiivka [formerly Stakhanov – ed.]. Losses [among the Russian forces – ed.] are being confirmed.

Near Lysychansk, our gunners covered with fire the Russian invaders who had just arrived for their tour of duty. An OMON detachment based in Sakhalin, which arrived in Ukraine to participate in the war on the orders of the Kremlin, was hit. At least 12 enemy special forces personnel were destroyed. Many Russians were also injured.”

Details: Despite the successes of the Ukrainian Armed Forces, the Russian occupation forces continue to deploy assault and military aircraft and use rockets and artillery to terrorize the local civilian population.

In particular, the Russians carried out four missile strikes and one airstrike on July 23.

Russian forces also intensified their operations in the area around Verkhnokamianske, but the Ukrainian armed forces forced the Russians to retreat with losses.

In other towns and villages the Russians carried out untargeted but extensive artillery and mortar attacks.