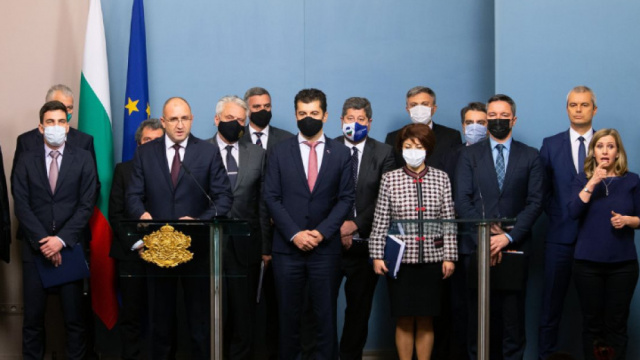 “The rhythm of modernization from army does not meet modern requirements. Effective measures are needed to increase interest in the military profession and develop the potential of modern defence. This was said by the Bulgarian President Rumen Radev after the meeting of the National Assembly Security Advisory Council (CASS).

“There are regulations that slow down the modernization to treat. Everything leads to a loss of combat capabilities and an increased risk to the health and life of the servicemen”, Radev added.

He added that council members are united around the position that escalation, ongoing conflicts, international terrorism and migration flows pose significant challenges to our country.

Bulgarian President: We all hope that a war in Ukraine will be avoided

“Areas with certain capacity deficits and technological lag in their development, caused by insufficient funding and limited regulations, have been described”, the President added.

He noted that modernization projects do not develop in a balanced way. “There has been a delay in the acquisition of a new fighter plane”, Radev added. He noted that the shortage is also a significant deficit.

US delays F-16 fighters in Bulgaria due to Covid pandemic

“A consensus was reached on the need to close the capability gaps and develop the modern defense potential of the Republic of Bulgaria within the EU and NATO. The members of the CASS agreed on the following proposals to the executive and legislative branches”, Radev noted.

– speed up the procedures related to the modernization of the Armed Forces and the maintenance of available weapons and equipment;

– alleviate the shortage of personnel and enhance the prestige of the military profession;

2. The executive power should develop a prioritized “plan-program of investment until 2032”, provided with resources and in line with the trends of development of modern technologies, in accordance with the objectives and plans for the development of the armed forces of the Republic of Bulgaria until 2032;

3. The Council of Ministers will analyze the possibility of updating the “National Plan to Increase Defense Spending by 2% of the Gross Domestic Product of the Republic of Bulgaria until 2024” adopted in 2017 so that the final goal is reached in 2023.

4. The Council of Ministers will provide financial resources for the maintenance of existing armaments and equipment, giving priority to preventing the loss of air and sea space control capabilities of the Republic of Bulgaria.

5. The executive authority to take measures to overcome the backlog and expedite the acquisition of new equipment under the contracts already concluded for modernization of the Air Force and the Navy, as well as to launch the project of modernization land forces.

6. The Council of Ministers is evaluating the possibility of creating an investment trust fund to Modernization of the Armed Forces, which will include funds not used in previous years for investment projects modernizationas well as funds from the revenue side of the Ministry of Defense budget.

“I would like to thank all participants for the in-depth discussion and for uniting around these important proposals for our Security and the development of the armed forces”, Radev noted.