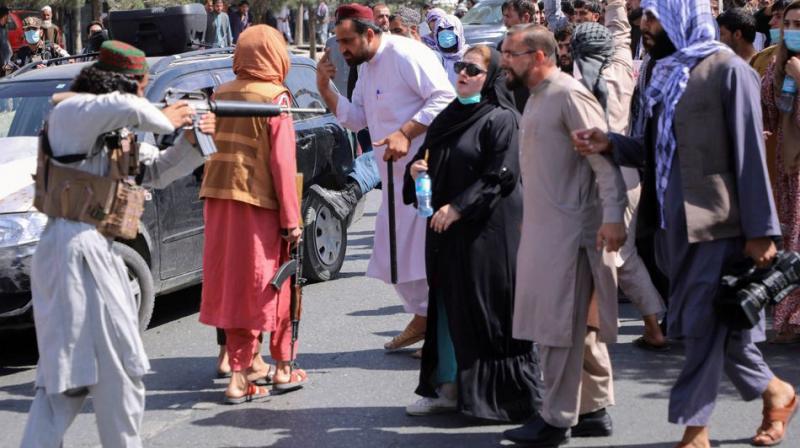 A member of the Taliban forces points his gun at protesters, as Afghan demonstrators shout slogans during an anti-Pakistan demonstration, near the Pakistani Embassy in Kabul, Afghanistan. (Photo: Reuters)

Amid continued protests by Afghan citizens, an “iconic” photograph has emerged that people around the world are in awe of. The Taliban took control of Afghanistan with lightning speed last month and the situation in the country has only gotten worse ever since. As the Taliban fired several shots on Tuesday to disperse hundreds of people gathered to take part in the protest in Kabul, a compelling photo of a woman standing in front of an armed Taliban gunman emerged. The image portrays the frank spirit of defiance of the Afghan citizens against the Taliban and it will surely be remembered for days to come.

The photograph was shared by Reuters news agency and tweeted by Afghan journalist Zahra Rahimi. She posted the photo on the social networking site with her message saying, “An Afghan woman stands fearlessly in the face of a Taliban gunman who has pointed his gun at her chest.

According to information from Reuters, Mullah Hasan Akhund has been appointed Prime Minister. Sirajuddin Haqqani, the new interior minister, is the son of the founder of the Haqqani network, classified as a terrorist group by Washington.